We believe in the making, from suburbs to seafront and aiming for the best possible condition to fulfill visions and building a society that will last. We like to get our hands dirty in the process because that´s how decisions follow the idea. A bit like crazy scientists with no clue how to stop… Our projects usually start with a discussion about life in general, what´s important and how to reach a common destination. 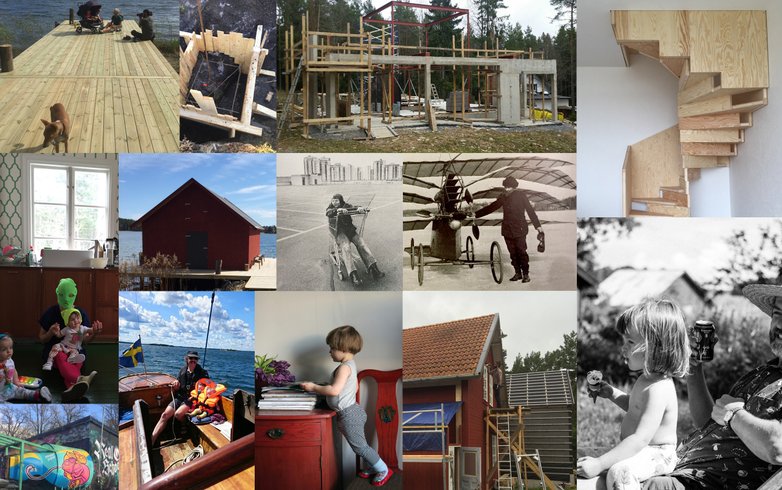 In the community change is constant with technology and movements that enables a new way of thinking and living. When creating architecture that enhances the flux of the community and building a sustainable society can be difficult and unnecessary slow, when buildings and society is slow in the making and not open to new inventions. Technology and the adaption of its applications is fast and the early adapters are already ahead up for the next change. Society’s approach on adapting to movements is fair, the legal and social structures are not up to speed. Making it hard to hold on to the progressive idea and movement in the process of creating architecture. But when progressive architecture comes to life although the resistance of slow cooked medias of society it inspires and ideas that were unknown and different before becomes the common good when realized.

Options available for building in the fabric of the city, slopes, mountains, and forests of the countryside is up for new alternatives when new developments is needed. The land on the one hand and the conditions for developing it on the other. Ideas with the ambition that extends above the division of the land and the built would become a common profit with far more potential than the separate two players that needs the most profitable deal every time. Many options for this are already out there like the DIY movement and the tech community, but the legal and social construction for this is holding on to the old and the usual like its hanging on to life itself.

A weird thing about that is for the alternative community the cost for making progressive projects happen is very cost efficient compared to the similar project made within the system. Making the old system not very sustainable, money and the cost of making projects happen is translated into resources in general, you could say that one money is one resource and we are very aware of how important it is to be resourceful in every aspect. There are limited resources for everyone everywhere and still that set of ideas extends only into keeping it as it is so that those who controls the profit still can make their profit. In the context of profit there is a logic that money makes society grow and develops successful businesses. But the last decades the digital revolution is all about making innovative solutions for a better society and that is not focusing on moneymaking first. So, the old ways holding on for as long as It goes is soon gone. And resourcefulness will be the way to proceed.

The intention of every new project starts with the understanding of the circumstances. The complexity and contradiction which contributes to the creative process in the making of architecture.

We welcome projects in different scales from every condition any where